I don’t know how many of you have been out to the Barrens lately, but it’s quite a spectacle.

The main event is the Prairie Lily. We’ve all seem them before many times, but never before have I seen them in these numbers. In past years, I’ve maybe seen a hundred or so, but this year there are well over a thousand that I can see just from the roads or fire lanes. I’m sure there are many more off the roads further into the prairie. There are quite a number of “doubles”, i.e., two flowers from the same stem, and we found maybe 6 “triples”. Note: I read where there can be as many as 5 on one stem.

My wife, Lynne, and I made several trips into the Barrens over the July 4th weekend, and it was great weather and perfect for taking photos. Note: The deer flies are pesky around the woods, so we go to the Barrens to walk, and on most days there’s a breeze to keep them away.

Our cameras aren’t that great, mostly Lynne’s smart phone and my old digital camera, but most of the photos turned out pretty good.  Then we struggled trying to figure out Flickr, but I think we managed to put on the FNBWA group site about a dozen photos of some of the wildflowers we photographed. In addition to the Prairie Lily (single, double and triple), we found and photographed the following: 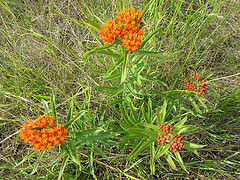 Butterfly-weed; Ox Eye Daisy; Bluebells (also called Harebells); Prairie Phlox; and the familiar Hoary Pucoon. To view these wildflowers go to: https://www.flickr.com/groups/fnbwa/  Click on the #2 contributor to see the 12 photos.

August 18, 2022 A few folks met at the cabin for our last field day of the season, which we call “Sharp-tails and Bird Dogs.”…

Bug Art on the Barrens As I wander around the Barrens, NBWA, each year I often noticed those ‘pine cone’ like things on the willow…

This site uses Akismet to reduce spam. Learn how your comment data is processed.